October 2020 for the CryptoCurrency market can be said to be a volatile month with a series of negative news: President Donald Trump infected Covid-19, Bitcoin mining from the BitMex exchange, tension ahead of the election President of the US,… However, in the face of such bad news, VNDC still affirmed the reputation and safety when maintaining its growth in the month.

In October, VNDC continues to be chosen by investors as a trusted wallet address to store and trade digital assets. Compared to the previous month, the number of VNDC users has increased by 53,409 people, bringing the total number of users to 760,889. This is the result of continuously upgrading and updating the application to suit the needs of the user.

It can be said that the above results are the achievement of VNDC’s efforts in continuously giving market warnings, helping investors to have the right direction, thereby making an effective investment. Along with that, the reputation and stability of the VNDC Wallet is also an important reason that makes users feel secure, trusting in choosing to trade in this complicated market.

Continuously updating new trendy products to help users diversify their options when investing in cryptocurrencies, in October, VNDC continued to list 11 assets that are now the top interests. 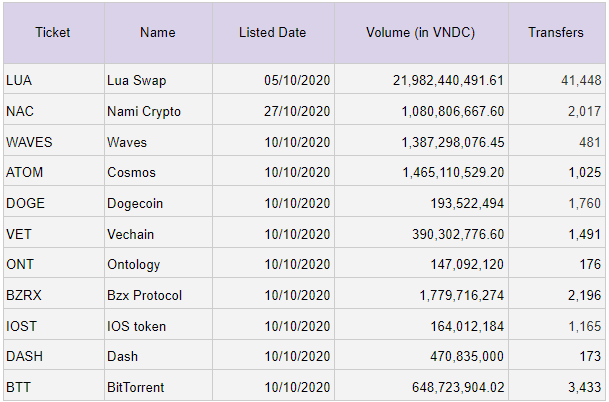 As can be seen, among the newly listed coins, Lua Swap is the one with the biggest attraction to investors. Trading volume in October of this coin reached 21.9 billion VND since its launch on 05/10. Along with that, the number of transactions of this asset also outstripped other currencies when it reached the threshold of 41.5 thousand transactions in just over 20 days.

On 10/10/2020, VNDC continued to list 9 digital coins: Waves, Atom, Doge, Vet, Ont, Bzrx, IOST, Dash, and BTT. These are all Defi coins that have received great attention from investors. Therefore, after being officially listed on VNDC, the transaction volume of these assets also reached a significant number.

In particular, the appearance of NAC on the VNDC Wallet has also attracted a large number of investors participating in the transaction. Listed at the end of October and after only 3 days, the trading volume of this currency reached 1.08 billion VND, the number of transactions reached 2,017 turns.

In October, TomoChain was the leading coin in the top coins stored on the VNDC Wallet with the amount up to 19.9 billion VNDC. Followed by the USDT, ETH, and BTC with equal ownership, ranging from 10 billion – 20 billion VNDC. In particular, based on the data, it can be seen that TomoChain is a very potential coin when being chosen to store alongside market-leading coins such as USDT, ETH, and BTC. 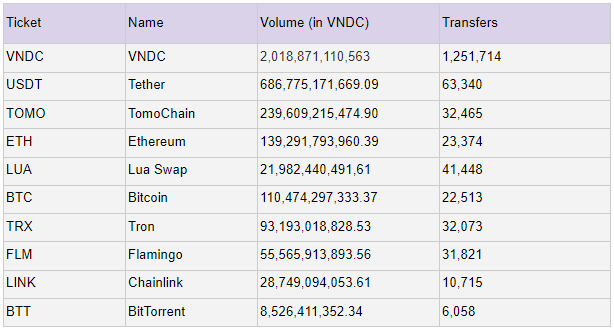 Besides, for LuaSwap, although newly listed, the number of transactions of this currency ranked third only after VNDC and USDT. This is a sign that the coin’s trading activity is very active, reaffirming its appeal on the Crypto market.

With the aim of diversifying options, bringing the best experience for users, VNDC has updated and improved the feature of buying / selling VNDC through partners. This change has made it easier for customers to choose business partners, ensuring safety, reputation, and high liquidity during transactions.

In addition, so that users in countries around the world can buy Bitcoin (BTC), Ethereum (ETH), Tether (USDT), and other digital assets easily, VNDC has cooperated with Simplex to implement payment methods by international payment cards (Visa, Master) with many different currencies.

It can be seen that, in October 2020, despite much bad news, the indexes of VNDC still have positive signs. This demonstrates the stability and credibility of this currency in the volatile CryptoCurrency market. In the coming month, VNDC will continue to strive to become a secure wallet address, which is the first choice to accompany investors in the cryptocurrency market.